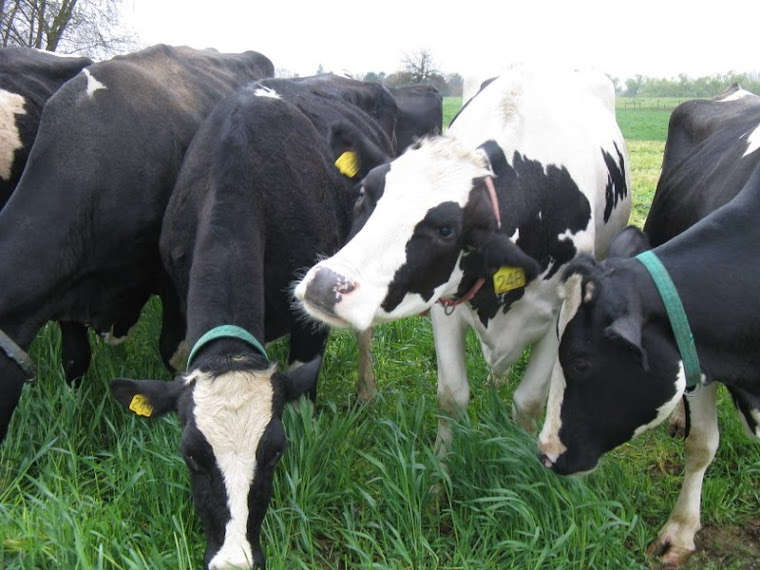 
Today I get to introduce you to Becca, a blogging friend of mine, who lives in Sicily, Italy!  I first discovered Becca a little over a year ago, when I was reading another blog.  (I must confess...I don't even remember who's it was!)  She had commented on that blog... I clicked on the link...and began reading about her family's life in Sicily.  I was fascinated, and have thoroughly enjoyed reading about their lives in a part of the world that I can only hope to visit someday!  Her husband (Elliott) is a veterinarian, and right now he is serving in the Army on assignment in Italy.  Becca, Elliot, Lena (almost 3) and Gil (1) live in an Italian town surrounded by green valleys, and their house is in the shadow of a medieval castle.  I am sure you will enjoy reading Becca's stories of life in Italy as much as I do! 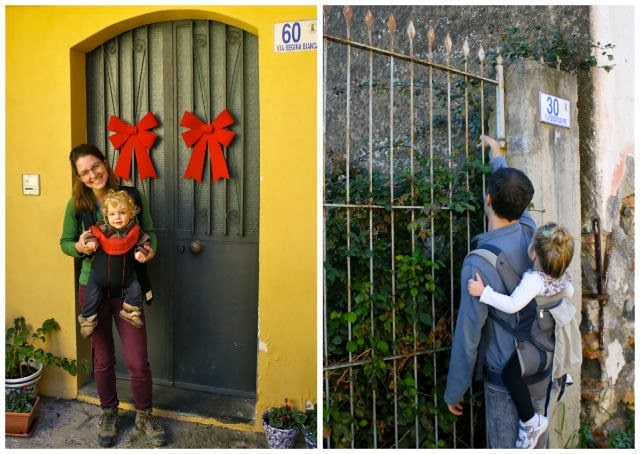 Hi there, everyone! I am a faithful reader and fan of Alica’s blog, so it’s a lot of fun to be here today. Like the rest of you, I’ve come to love Alica’s perspective about life on a small dairy farm. I thought some of her readers might also enjoy a window into farming life in Sicily!

About a year ago, Elliott and Lena were on a walk when they discovered a small farm in the valley below our house. The owners are a middle-aged Italian couple that has been married for 34 years. Salvo has slicked-back blond hair and is never seen without camo pants and a cigarette. His wife Paula rarely leaves the house and always sends me home with things from their garden: lemons, eggplants, oranges, zucchini, tomatoes, and mandarins.

Salvo and Paula have a small farmyard below their house with pigs, chickens, a duck, a goose, a tortoise, rabbits (for easy eating!), the occasional porcupine, multiple dogs and ferrets for hunting, and a motley crew of other canines who keep watch over the farm.

We now visit every week or so to let our children see and feed the animals, and on weekends we sometimes hike past the farm into the valley for a picnic. A couple of weeks ago we took some pictures as we visited and picnicked. Come along with us to a Sicilian farm! 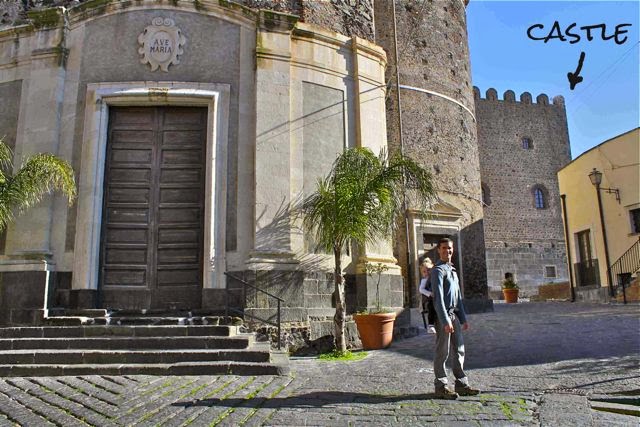 Leaving our house, we walk past the castle and town cathedral, both of which you can see behind Elliott and Lena in this photo. We continue down the cobblestone streets and to the outskirts of town to the farm. 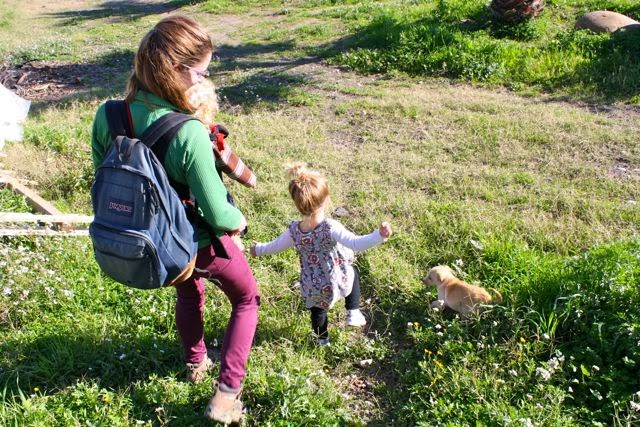 When we arrive, our favorite dog, Melissa, and her son, Patch, greet us. Behind Elliott and Lena you can see the cathedral, castle, and our house! 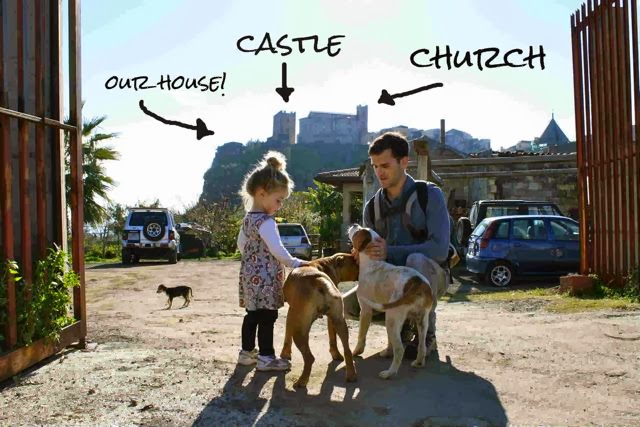 We’ve all fallen in love with a little puppy that lives on the farm. We first spotted him hanging out with the pigs, no mother or littermates anywhere to be seen. Elliott named him Wilbur after Charlotte’s Web. He’s a total mystery to us. Why in the world did the pigs tolerate him in their pen?? Normally they would kill and eat him. Why didn't he ever join the other dogs up by the house? 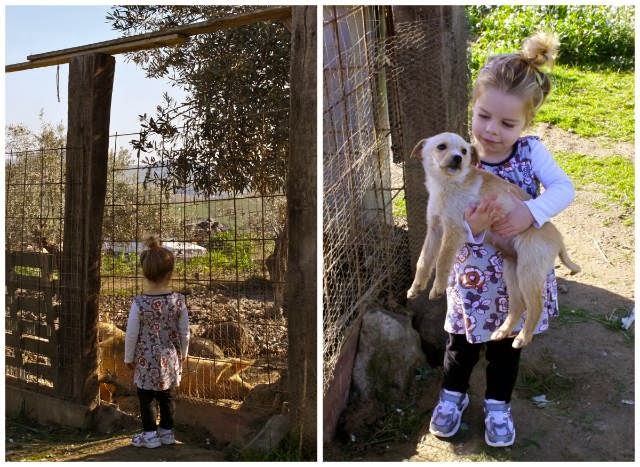 There are about 12 pigs on the farm now. Three sows had piglets at the same time earlier this year, so there were about 25 newborn pigs toddling around the pigpen at one time! Salvo sold some as piglets, and will continue to sell them as they grow. How different does this look to most pig farms in the States? 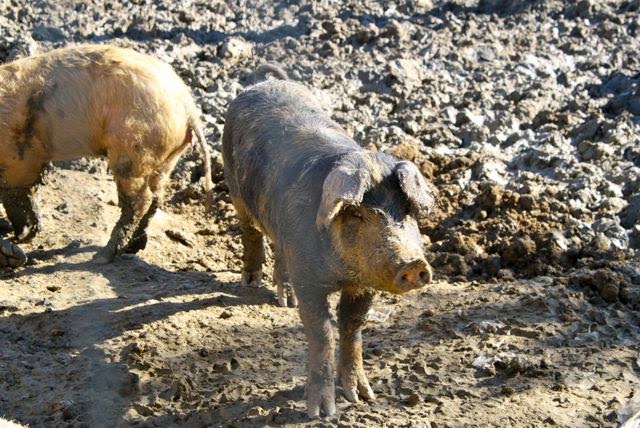 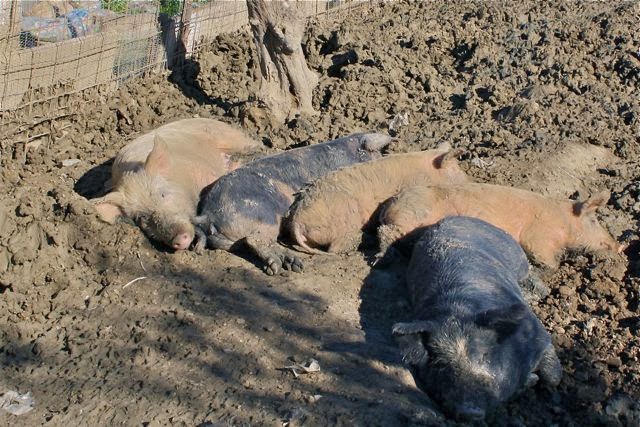 All the animals’ pens – pigs, chickens, some hunting dogs – are grouped together about 100 yards from the house. Lena loves to pick fresh grass for the chickens. “They gonna have good lunch, Mama!” 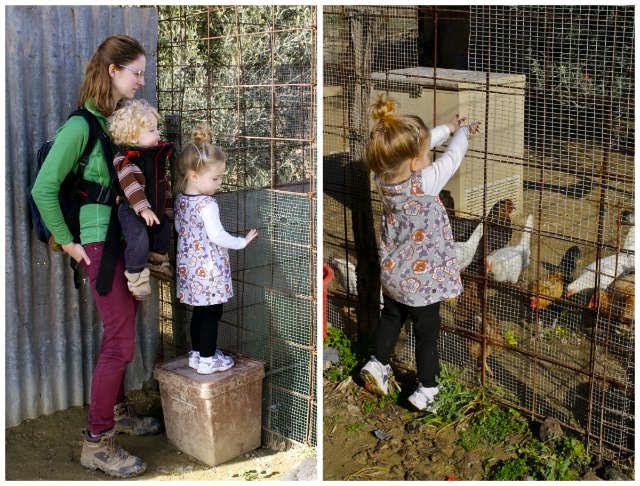 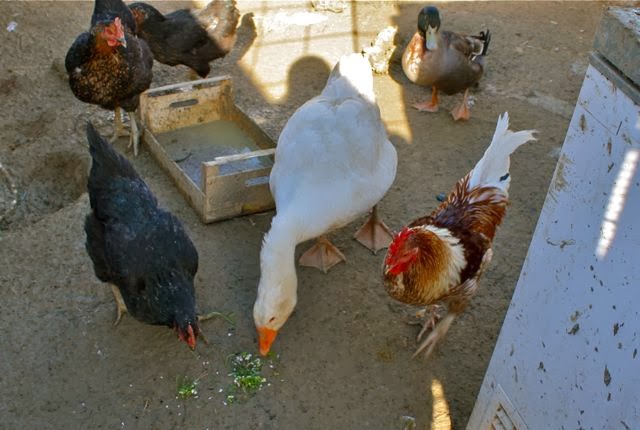 The conditions of the animals’ enclosures make me sad. I am sure the ragged fencing, dirty pens, and quality of food would surprise you, too. However, the pigs at least do get a pretty good diet of all kinds of scraps… including expired pasta, it looks like! How very Italian of them. 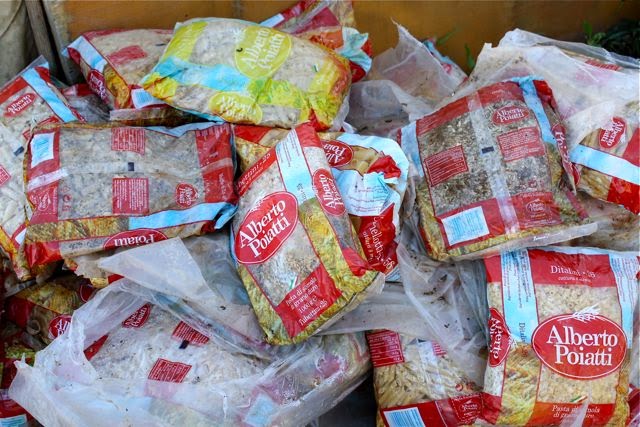 Still, even in the midst of the pigs’ squalor, there is so much beauty. Around them, the vegetation grows lush and green: 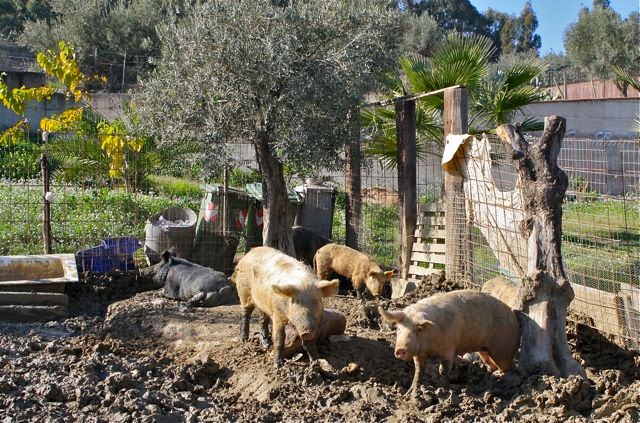 Next to the pigs’ pen, I spot a ripening artichoke, almost hidden in the silvery green leaves: 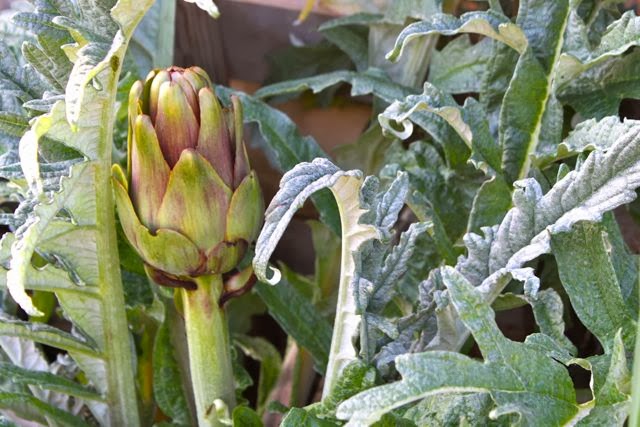 And the sunlight makes even the farmyard junk look beautiful: 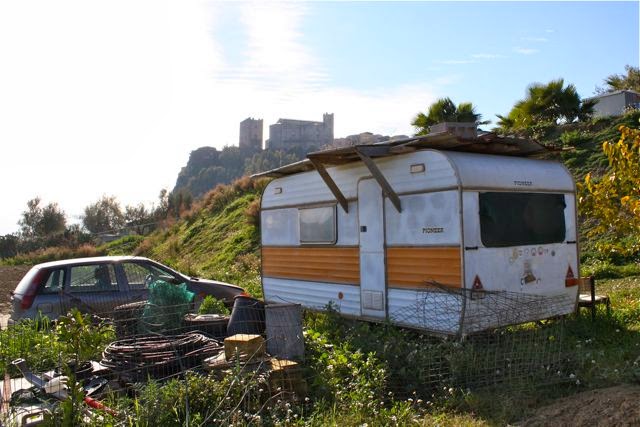 After we visit all the animals, we head past the farm into the valley for a picnic lunch. Lena decides to bring Wilbur: 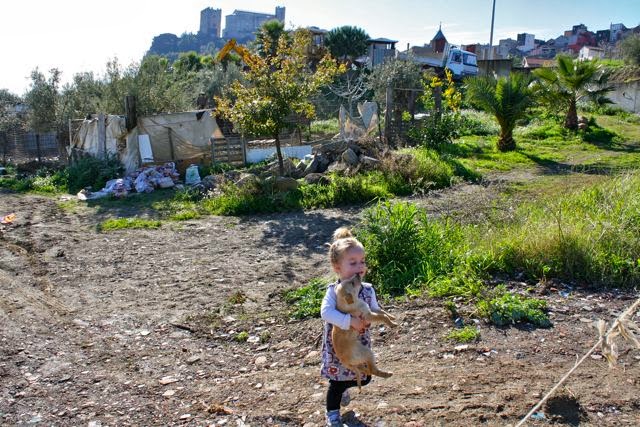 We find a beautiful spot in the sunshine to share a meal. In the right-hand side of the photo, you can see some of the trash that the town has deposited in the valley over the years. Unfortunately, there is a lot of loose trash in Sicily that exists right beside meticulously cultivated agriculture (like the olive grove in the left-hand side of the photo). We often say that Sicily is a mix between classical rural Italy (like Tuscany to the north) and a third-world country (like Libya to the south). 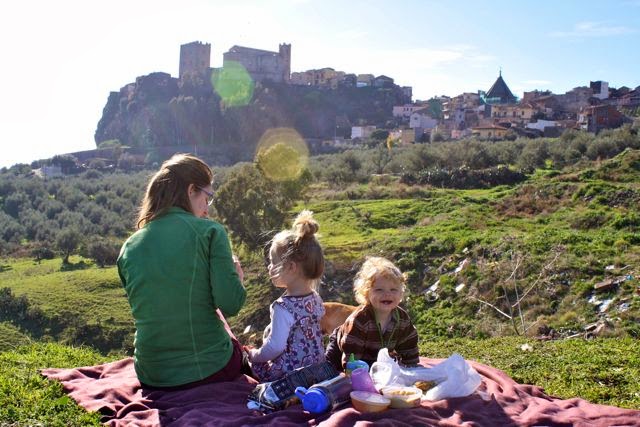 Below us in the valley we can hear cows lowing, which makes us think of Alica and her farm! We often see herds of cows moving through the valley below our house, and the sound of their lowing echoes up the cliff so that it seems like it’s right outside our windows. 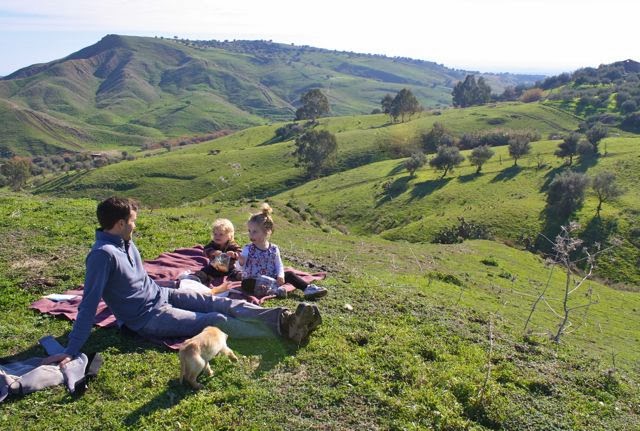 Even though all the land in the valley is privately owned, cowherds and shepherds are permitted to let their animals graze freely year round. That is one sight I love in Sicily: large herds of sheep stopping traffic outside our town as a sprightly shepherd follows them, chatting away on his cell phone. 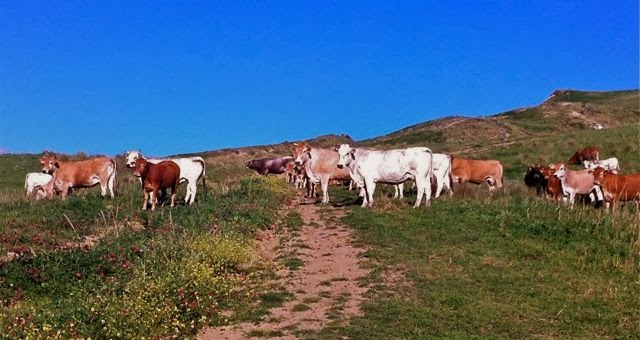 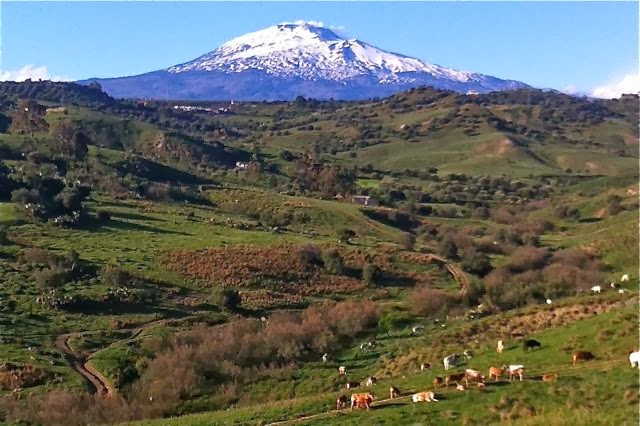 That’s Mt. Etna, our local sleepy-but-active volcano, in the background of the last photo!

After our meal, we pack up and start the walk towards home. Lena finds another enthusiastic friend as we pass by the farm. “Sure you don’t want to take me home with you?!” 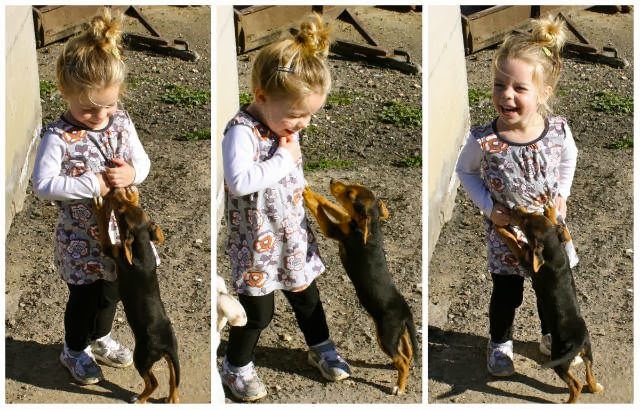 Sicily is such a land of contrasts: fresh natural beauty beside decades-old rubbish, modern homes beside medieval cathedrals, cliffs beside valleys, sheep beside cell phones. It has been a great gift to raise our children in this lovely place.

I hope the simple joys of a hike to a farm, a picnic in a valley, and a handful of grass given to some eager chickens will be things we’ll remember and seek wherever life takes us.


Thanks so much for sharing your story and photos, Becca! Head on over to Becca’s blog to learn more about her life in Sicily!

I enjoy hearing what you have to say! Thanks for your comments! 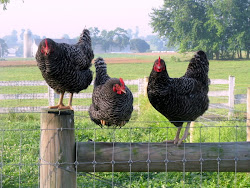